He had an hour to get home. If he didn’t make it …

I wrote this from a prompt challenge (see the post title for the prompt). It doesn’t fit into any of my current worlds, so I present it here just for fun.

He had an hour to get home. If he didn’t make it … he stopped to scratch an itch under his chin. He was too far away, farther than he’d meant to be, but he wore no timepiece and had become engrossed in his tasks–suddenly realizing the sun’s low position in the sky caused alarm. He had to hurry. He didn’t want to think about what would happen if he arrived too late, not after what happened the last time he was trapped Outside.

He never forgot the suffocating murkiness of that night, the crushing darkness that forced him into hiding places smaller than he could comfortably fit. He could focus on nothing but the strange creatures dancing in the shadows, never sure if they were real, or if they were only the scattered flecks of moonlight playing tricks on his eyes.

Then there were the noises: howling, screeching, terrifying sounds of the wild ones, creatures who fed on his kind. Worse was the throbbing of the machines, the humming, the grinding, their din the only warning as they approached, their flickering lights searching for him in the darkness.

But even those horrors were less nightmarish than the Hunger. The aching pangs, the emptiness growing deep inside, relentlessness. He would do anything to escape that wretched feeling, anything. He turned towards home and ran as fast as his legs would carry him, running for what seemed an eternity, guided only by his half-remembered knowledge of the terrain. He ran faster than he’d ever run before, propelled by his fear of the hunger, stumbling as his growing fatigue crept upon him. As his stamina faded, so did the sunlight–he was almost out of time.

Close to exhaustion, he finally saw it: the small, low door of his refuge, open. His relief was short-lived–as he watched, the door began to close. Horrified, he used the last of his strength to dash towards it, squeezing through the shrinking opening, relaxing only when he finally heard the latch click shut behind him.

He was finally home.

He was finally safe.

Tonight, the Hunger would not consume him.

She-who-closed-the-door clucked her tongue. “You almost missed your supper again, Muffin, you silly thing.” She set his bowl on the floor beside him, stroking his fur while he purred. 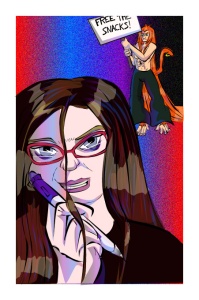